Notably faster and much more efficient without compromising on quality: the reorganization of metering machine production at Hennecke

Despite the omnipresent Corona crisis, Hennecke is investing around two million euros in a step-by-step structural transformation of its standardized metering machine production. Creating added value under the umbrella of the company's “Hennecke 2.0" strategy, this venture represents one of the largest single investments in the company's recent history at the Hennecke parent facility in Germany. The new 'Hennecke Production System' (HPS) was launched in July along with the associated reorganization of the metering machine production at the Sankt Augustin site. The aim of the pilot project is to increase the competitiveness of the entire company group. The polyurethane specialists from Germany's Rhineland region supply a wide spectrum of customers who will particularly benefit from the synergies created by the new production system.

Thomas Wildt, CEO of the Hennecke Group, summarized the importance of the new production system: "The aim of the new Hennecke Production System is to ensure a sustainable, successful future for the Sankt Augustin site by combining practical methods and design principles for optimum efficiency". In effect, the set of measures for metering machine production at Hennecke's parent facility play a decisive role in the gradual realignment of the Hennecke organization worldwide. Here the polyurethane specialist is unbundling its organizational complexity: as of 2019, the machines that were previously designed and built at several sites in parallel are now being produced at only one of the company's four centers of excellence. The development, design and manufacture of all high and low-pressure polyurethane machines and all available mixhead systems have been consolidated at the German headquarters in Sankt Augustin - these represent the cornerstone of the entire portfolio, as well as thousands of processing systems worldwide.

The HPS is a modernized version of the well-known lean production systems and its content has been tailored specifically to the entire Hennecke organization. The system is a methodology for production, and at the same time represents the culture of the future for Hennecke GmbH and the international Hennecke GROUP. The main added-value of the HPS lies in the interlinking of the different production areas, which allows for a synchronized, waste-free production that is aligned with customer demand. Here the focus is on reducing stocks and downtimes and on maximizing quality and adherence to delivery dates, as well as using assembly space to add value. Besides establishing a set of process rules to ensure smooth order processing, essential improvements have been made to the production layout. The required reorganizational measures have been successfully implemented despite the adversities caused by the Corona crisis. These include putting the infrastructure into operation and setting up the new work spaces. Even though completion of all the individual measures is planned for the final quarter of 2020, the changes are already clearly apparent. Removing the partition walls and making a distinct separation between the areas for assembly and material supply have created maximum adaptability for a freely configured and flexibly designed flow production of largely standardized individual metering machines and their assemblies. Separate areas are also dedicated to pre-assembly and customization.

The completion of these major reorganization measures represents an important milestone for Hennecke in the successive transformation to a center of added-value and for the future of the standard metering machines at the Sankt Augustin production site. This is reason enough for the Hennecke staff involved to celebrate the ‘commissioning’ of the new production system as an integral element of machine assembly. Together with the Hennecke Advisory Board, the management inaugurated a graphical depiction of the HPS which is on central display to staff, customers and suppliers in the assembly hall. The official inauguration ceremony was attended by a small group of people in conformance with the current COVID-19 restrictions.

To depict the system, Hennecke deliberately selected a well-established pillar model which looks like a house. The Hennecke Business System (HBS) and the Hennecke Core Values constitute its strong foundations. The concept of 'performance management by objectives' forms the so-called substructure and helps the company remain on its chosen course using key performance indicators. The management principles of the system for the future are the delegation of responsibility, autonomy and driving company success also on the basis of performance indicators. Each individual element of the house is hugely important in itself. But it is the right interaction between the individual components that makes the HPS strong enough to withstand all environmental influences in the future.

Now that the starting signal has been fired, the Hennecke team is highly motivated to face further challenges along the way to meeting their goals and to further demand and promote cultural change and a constant willingness to improve processes and workflows. Securing the sustainable, successful future mentioned above will now be much easier to plan, in spite of the current global crisis. 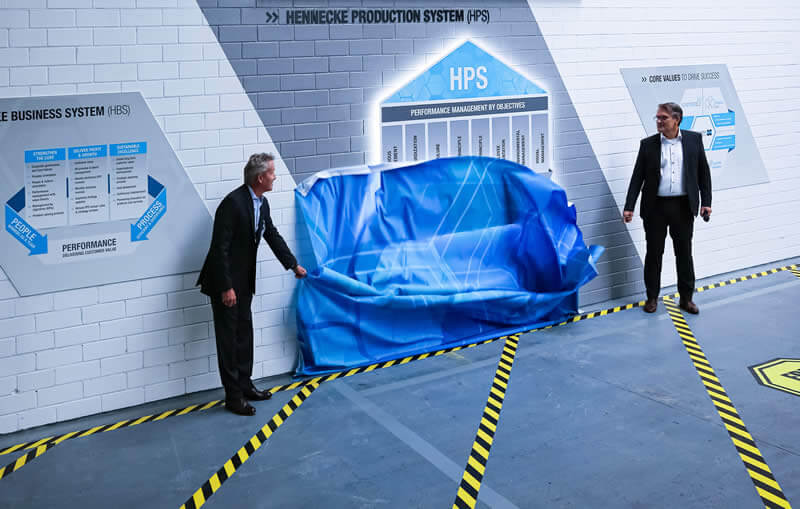 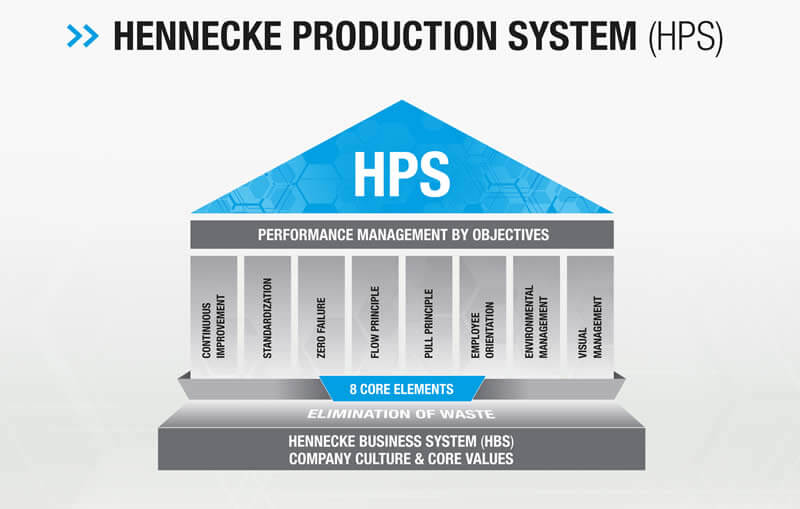