With eight partners, 21 specialists, and 28 weeks of development time until the potential start of series production, Hennecke introduced the R.A.C.E. project at the K 2016 in Düsseldorf. At the fair, the PUR specialist presented a complex hollow construction part suitable for mass production for the KTM 1290 Superduke, and its development – from design to simulation of the process steps, to automation and to a production cell with a cycle time of 125 seconds. Interest among the trade fair visitors was so great that the project partners decided to present the technology more extensively over three days at Engel in St. Valentin with the motto "R.A.C.E Experience."

Many interested specialists from all over the world accepted the invitation of the project partners. The focus of attention was the CAVUS technology from KTM Technologies for the production of complex geometries for hollow construction parts. CAVUS constitutes the process chain from the core production and manufacture of the preform with carbon fibres in braiding technology, to the HP-RTM process and the release of the core material. Along with the typical CAVUS process conditions, many raw material details and machine technologies were introduced – including, of course, Hennecke's high-pressure metering machine STREAMLINE. As a highlight, the hosts demonstrated the process live in the Engel lightweight construction technical center.

Finally, the project partners offered a glimpse into the future of this technology and its potential. To everyone's surprise, KTM presented new test components that would first be introduced by the vehicle manufacturers at Composite Europe in the autumn. This was gratefully received by the designers, OEMs, and tier one suppliers who had travelled to be there. The ensuing discussion showed all R.A.C.E. partners that the topic is being pursued with great interest.

Introducing the background information of the R.A.C.E. project was of course the focus of the three days, but as the icing on the cake, the partners organized a closing event on the house test track of the Magna Steyr group, also with the motto "R.A.C.E. Experience." Here, after the theoretical portion, all participants were also able to enjoy the racing experience in a specially organized KTM X-BOW. KTM presented its interpretation of a super sports car for the 21st century with the series version of the KTM X-BOW. It is the first series vehicle in the world with a monocoque construction made entirely of carbon fibre composite material. Reinhard Kofler, a professional racecar driver – who is also a test and development driver at KTM – demonstrated his ability and drove countless rounds with the participants. There was a true R.A.C.E. feeling in the air, because Kofler was unbeatable at the last guest start of the racing series "KTM X-Bow Battle." He earned a double victory at Lausitzring and Pannonia Ring. Anyone who wanted to take it a little easier could test the electric Enduro KTM Freeride E-XC on the off-road trail of the test site.

The R.A.C.E. Experience event has demonstrated – both in the technical center and on the racetrack – that things are racing forward. The technology for the manufacture of extremely lightweight hollow parts suitable for mass production is an important contribution toward advancing the lightweight construction of vehicles. 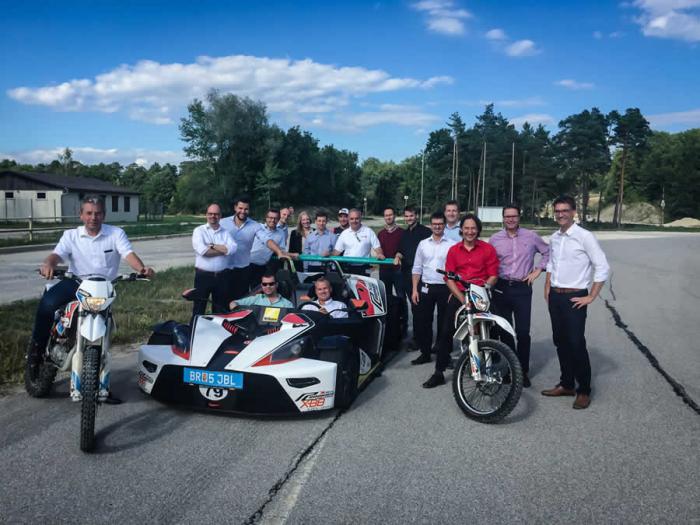