PUR fascination – Hennecke at the "K": A total success

The K 2013, which took place in Düsseldorf from 16 October to 23 October 2013, exceeded all of Hennecke's expectations. Two machine innovations met with particularly great interest from the professional audience: the JFLEX continuous slabstock line and the HIGHLINE metering machine. However, visitors were also enthusiastic about the lightweight automotive parts on display. An engine bonnet with a honeycomb core, a latch cover made from carbon fibre-reinforced plastic as well as instrument panel parts impressively illustrated Hennecke's competence in lightweight construction.

Hennecke's trade fair booth in Hall 13 continuously attracted high numbers of visitors. In addition to the lightweight topics, the visitors were focussed on the two new machines, and were particularly impressed by the price- performance ratio. Many interested visitors took up Hennecke's offer of a trade fair shuttle to the company's headquarters at Sankt Augustin near Bonn where the JFLEX continuous slabstock line was shown in action for the first time. The plant covers the capacity range between discontinuous and continuous slabstock plants. Hennecke is targeting at foam manufacturers who want to achieve better quality and higher raw-material yield than with discontinuous plants, but who are unwilling to make the high investment in conventional plants. These may be, for instance, furniture and mattress manufacturers who no longer want to purchase foam, but would like to produce it themselves to meet their own requirements. The new JFLEX slabstock plant from Hennecke GmbH has been developed precisely to cover this medium production volume. It is very compact, significantly more cost-effective than conventional continuous production systems, and convinces to the last detail due to its usual quality.

The second highlight at the show was the new HIGHLINE metering machine. With the new machine, the machine manufacturer offers an interesting overall package for two-component applications that immediately impressed trade fair visitors with its attractive price- performance ratio. Thanks to the comparatively low purchase price, and the choice of top-quality components and useful additional equipment, investing in HIGHLINE machine technology is worthwhile for countless possible applications. Whether you want to make small series production, perform various hand-held applications, or incorporate it into highly automated processes.

The focus of interest was also on various exhibits that particularly emphasise Hennecke's competence in lightweight construction. The highlight here was an engine bonnet with a honeycomb core. In principle, the sandwich structure of the bonnet resembles the design of a PREG load floor for luggage compartment systems. A honeycomb core is used for the production of the bonnet, with glass fibre reinforcement applied from above and below. In order to achieve the different compression hardnesses and stability required in the bonnet, e.g. for hinges, the honeycomb core is designed as a reinforced structure at the relevant points. Afterwards, the PUR matrix is applied using the PUR-CSM spraying process. In this patented spray-up approach, the semi-finished fibre products are wetted on both sides with a thermally activated PUR system. This makes it possible to apply a thicker layer of material in specific, targeted areas of the component. The part is then compressed and cured inside the mould. In the next stage, the RIM process is used on the outside and around the outer edge of the bonnet to produce the paintable class-A surface. The engine bonnet has passed all of the comprehensive approval tests for use in the automotive industry and naturally also the new requirements for pedestrian protection. It will be possible in future to extend this new design to many other exterior parts, such as tailgates, doors and roofs. Compared to CFRP products, for instance, the production method also scores points in terms of price-performance ratio: a further important step on the road to a completely lightweight car body.

Just as innovative are the instrumentation panel components for the Hyundai Kia Automotive Group, which are characterised by especially high quality in terms of their haptics and production technology. The thermoplastic composites consist of a thermoplastic substrate, a decorative film overlay, and a foam layer made from polyurethane, which are combined in automated process steps using a single compact plant network. In contrast to other soft-touch production processes, this "Varysoft" process is characterised by even greater softness. In the field of HP-RTM process engineering (High-Pressure Resin Transfer Moulding), Hennecke was also able to present a pioneering part, and simultaneously the corresponding "end product" at its K booth. A latch cover made from carbon fibre-reinforced plastic for the X-Bow sports car manufactured by KTM. The production of the two parts requires a process combination of Hennecke's and Engel's machine and systems technology, and thus also illustrates the close cooperation between the two companies.

The trade fair booth was well visited throughout the entire duration of the show, and the large number of innovative topics met with great interest. All innovations were enthusiastically presented to the industry professionals by Hennecke's trade fair team. Several orders were concluded on the spot. In summary, we can safely say it was a total success. 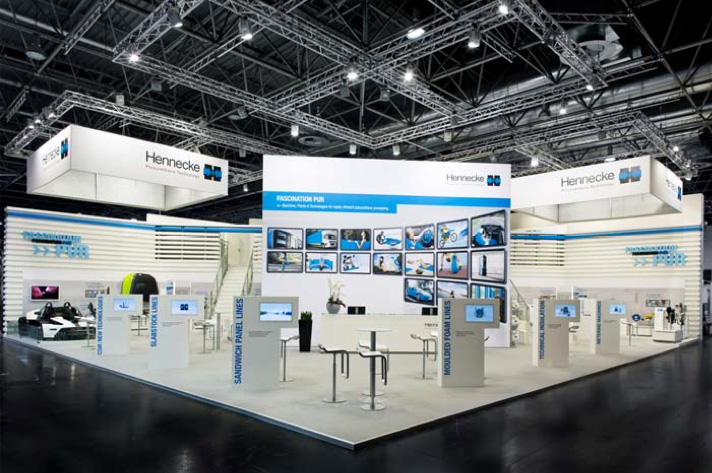