No two pipes are alike

The UNIROR Universal-Rohrreinigungs GmbH from Forst in the region of Lausitz is an internationally leading specialist in the cleaning of pressure lines. The company has been active around the globe for 20 years providing a free pressure flow in pipelines. The pipe cleaning specialists install pigs made from polyurethane for this purpose. Owing to a new TOPLINE type Hennecke metering machine as well as extensive tests and optimisations in the Hennecke TECHCENTER, the workers at Lausitz are now able to produce significantly more efficient pigs in a better quality.

“No two pipes are alike,” the managing director of UNIROR, Jeannette Jentsch, explains the challenges of this specialist cleaning technology. “Steel, concrete or plastic pipes transport drinking or process water, oil, gas, cement, slurry or liquid and paste-like foodstuffs. Our pigs are suitable for all pipe types and media.”

The pigs pass through the pipe using hydraulic pressure. They are specially manufactured for each particular operational application and can be the size of a small cone or, just like the biggest pig produced so far, have a cylindrical shape with a 3.2 m diameter and 4 m length. The core of the pig is made of polyurethane foam. The external wall is coated with an additional PU material in order to make the pig abrasion resistant. The external wall can be equipped with various small tools in order to remove scaling from inside the pipe, as the pig works in direct contact with the pipe walls for adherent scaling. For loose contaminants, the pig is slightly smaller than the pipe diameter and induces an increase in the flow rate between the pig's external wall and the pipe's internal wall, thus swirling up the waste material and driving it in front without causing pressure surges. The pig systems are produced in a way so that pipe lines coated on the inside are not damaged.

The appropriate strength for the respective application of the pig is important for cleaning optimally. If there are narrow points, e.g. through spacers, the pig has to be very flexible so that it can reassume its previous shape after the narrow point. For solid deposits, the pig is hard and firm. The workers in Lausitz produce the pigs by hand.

“Eight years ago we started a research and development project for improving the production and application technology for synthetic pigs – aided by the state of Brandenburg and with collaboration from the Brandenburg University of Technology Cottbus as well as Vattenfall, BASF and LMBV,” explains Jentsch. “The low pressure system that we had constructed at that time for core production was worn out after a short time and was no longer on par with the current state-of-the-art technology. The material and energy consumption was simply no longer up-to-date. The foaming of the core also took much too long.”

Jentsch and her team looked around for a new system among the producers of PU metering machines. To this end, Jentsch said: “The possibility of extensively testing and familiarising ourselves with the metering machine in the Hennecke TECHCENTER using our mould and raw material components over several days convinced us immediately. We did have to adapt our manufacturing method from low-pressure to high-pressure mixing, which was unfamiliar to us up to that point. With their extensive experience, however, the application specialists in the TECHCENTER helped us a great deal at this point. What was apparent to us straight away was the clear improvement in the quality of the pigs. With the old system, it was very difficult to meter out the tiny amounts of blowing agent as accurately as we needed for our various formulations. With the new system, it was no longer a problem at all to meter out these tiny amounts with reproducibility for each pig. The manufacturing times have significantly dropped too. Furthermore, the material losses are a lot lower, as rinsing of the lines using high-pressure technology is not necessary any more.”

Hennecke has customised the Standard TOPLINE metering machine for the special requirements of pig production. The PU specialists have installed a special injection block onto the mixhead in order to meter out tiny amounts of propellant with reproducibility. Furthermore, the height of the mixhead boom can be adjusted so as to be able to fill the various mould sizes.

At the end of last year, UNIROR produced 120 large pigs within four weeks using the new TOPLINE metering machine for a major contract. “We would never have managed that with the old system,” Jentsch emphasised. “It ran like clockwork with the new Hennecke metering machine. I am sure we could even manage more too.” 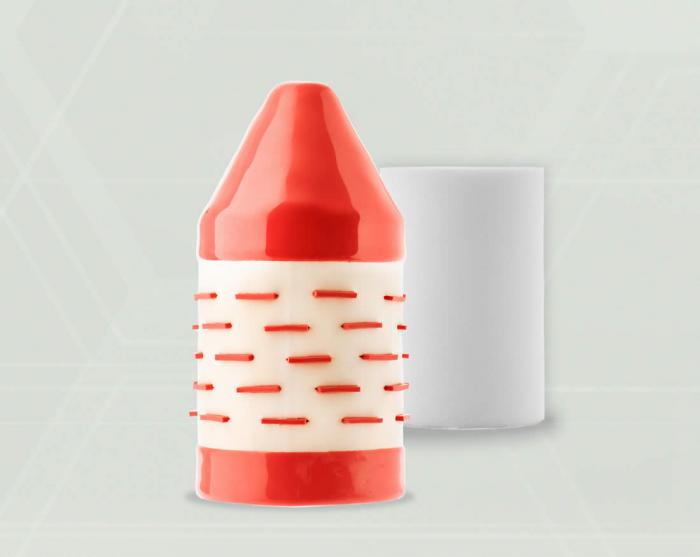