The new JFLEX: bridging the worlds of discontinuous and continuous slabstock lines

If the production volume of a foam manufacturer is too large to be economically manageable with a discontinuous plant, the manufacturer often faces a dilemma: In order to achieve higher capacities, he needs to make a relatively big investment in a continuous slabstock line, which, however, is usually oversized for his needs because of the high output rate. The full capacity of these slabstock lines of approx. 150 tons per working day can only be used to a limited extent due to various processing limitations. Therefore, in the worst case, the machine is not in operation most of the time. For rather small production volumes, discontinuous slabstock lines are typically used. However, the large amount of cuttings and labour-intensive production are clear disadvantages of this production method.

So far, the market gap lying between discontinuous and continuous slabstock lines has not been covered yet. Hennecke is targeting at foam manufacturers who want to achieve a better quality and higher raw-material yield than with discontinuous plants but are unwilling to make the high investment in conventional continuous lines. These may be, for instance, furniture and mattress manufacturers who no longer want to purchase foam but would like to produce them themselves to meet their own requirements. The new JFLEX slabstock line from Hennecke GmbH has been developed exactly to cover this medium production volume. It is very compact, significantly more cost-effective than conventional continuous production systems and convinces to the last detail due to its usual Hennecke quality.

Hennecke JFLEX lines are operated at one-fifth of the usual production speed of traditional continuous plants and still manufacture the same block size. Thus, the machine is only approx. twelve metres long. A great benefit, considering that conventional slabstock lines, with up to 50 metres, are more than four times as long. Due to the small footprint, the user saves precious space or can considerably reduce building costs.

The difference in length results from Hennecke’s new liquid-laydown technology. For conventional, continuously operating slabstock lines, the expansion speed of the polyurethane mix determines the production speed. Usually, this is approx. five metres per minute. Thus, the specified speed also determines the length of the entire plant, since the foam has to mature for a certain period of time before it can be cut.

Now, Hennecke's PUR experts have developed a patented process enabling a production speed of only one metre per minute, thus shortening the plant length accordingly. Main component of the new technology is the retaining zone of the new JFLEX: the so-called J-PIPE. Here, the liquid mix is poured on one side by distribution nozzles. Now, the expanding polyurethane escapes on the other side, without pressing back into the liquid. The cross section of the retaining zone is strikingly similar to the letter "J" – hence the name. The J-PIPE's operating principle is based on communicating vessels. The model shows that these are vessels open at the top, but connected by pipes at the bottom. Even for completely different shapes and sizes, a liquid in communicating vessels is always at the same level because the gravity and air pressure are constant.

In the J-PIPE of the slabstock line, the shorter front leg receiving the reactive liquid mix "communicates" with the longer rear leg, in which the foam rises within the rising zone. To this end, the J-PIPE uses the specific density change so that, thanks to a density of approx. 1,000 kg/m3, the short leg with the liquid is able to compensate the long leg with the rising foam, whose density is approx. 25 kg/m3. Thus, pressures caused by the expanding foam and the liquid are compensated and due to this balance, the plant can be operated at a production speed of only about one metre per minute.

In addition to the low production speed, only very short start and end blocks occur with very little waste as consequence. Hence, the plant can also be used for small production lengths. For example, to produce various foam grades. In addition, the low conveyor speed simplifies the removal of cut blocks, generating fewer requirements on the downstream infrastructure. The plant can be assembled and taken into operation quickly. Furthermore, all JFLEX assemblies are preassembled so that they only have to be connected locally according to the plug-and-play principle. 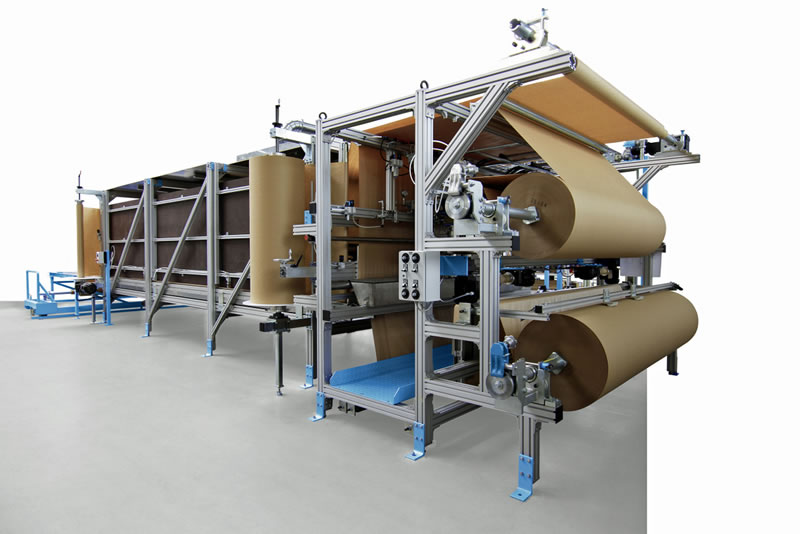