HP-RTM technology in Hennecke style: shorter curing times in the production of lightweight components thanks to VARIOCAST

The demand for High Pressure RTM (HP-RTM) in the field of lightweight automotive construction has been increasingly growing. Although Hennecke GmbH is already in an excellent technological position with the STREAMLINE high-pressure metering machine for HP-RTM applications, the Hennecke process experts are pushing the envelope of what is feasible step by step. The reduction of the specific cycle time plays a decisive role in this as it already did in the course of the process-related combination of high-pressure technology and the traditional RTM process. With the VARIOCAST technology the lightweight construction specialists of Hennecke GmbH are now able to further reduce the mould holding times for HP-RTM components. This especially meets the demands of users within the field of series production.

Machine systems of the STREAMLINE series have long been permanent fixtures on the market for lightweight applications based on fibre-reinforced structural components. A reason for this are the high-quality components and equipment features that are even part of the basic equipment of the state-of-the-art processing systems. The flow volume metering system, for instance, is density-independent and thus allows for an exact metering process. This is complemented by a highly efficient heating concept with a component temperature control of up to 130 °C and the effective evacuation of the raw materials in the day tanks.

Not by chance Hennecke distinguishes itself as an experienced partner in the field of raw material processing. While "traditional" polyurethane metering machines only process a few pre-formulated components, particularly large-scale Hennecke plants often meter more than 50 individual components with extreme mixing ratios and integral formulations, e.g. during the production of foam products or sandwich panels. Exactly this expertise now forms the basis for adding a useful additional function to the metering machines of the STREAMLINE series: the separation of the activator components by means of an individual additive line (VARIOCAST technology).

Here, the STREAMLINE does not perform the metering according to a defined output but in accordance with a time-dependent function. But why is this function particularly interesting for HP-RTM applications? In order to further reduce the curing time and thus the associated mould holding time, the injected mix can be time-dependently controlled. The advantage is that, depending on the level of the additional activation, the basic raw component has a specific start time and an individual curing time related hereto, which is significantly shorter compared to a fixed activation. Thanks to VARIOCAST, mould holding times can be reduced for long shot sequences. This is an indispensable advantage particularly in the framework of large-scale production of lightweight components, for instance, in the automotive industry.

As of now, Hennecke customers can include the equipment feature VARIOCAST as an option during the purchase of a STREAMLINE metering machine or they can retrofit their STREAMLINE machines with this feature. 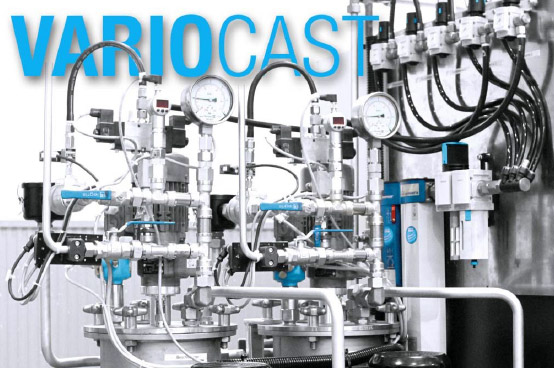