Hennecke at the K 2016 – with focus on groundbreaking polyurethane applications

The open and invitingly designed Hennecke fair presence created a great interest for the trade visitors at the world's most important trade show for plastics processing. This was mainly due to a variety of impressive exhibits and application examples of pioneering polyurethane applications and the spectacular live production of complex fibre composite hollow profiles. The exhibition also offered an ideal setting for Hennecke to celebrate its 70 year anniversary together with customers and interested visitors.

More than 230,000 visitors from over 160 countries ensured an excellent atmosphere during the eight days of K 2016 in Dusseldorf. The Hennecke trade fair stand was well visited throughout the entire duration of the event, and the large number of groundbreaking themes met with great interest. Overall, the PU specialists led many high-quality exhibition talks.

The main attraction at the booth was the live presentation of an efficient production cell for an automated high-pressure RTM lightweight process. Many interested spectators could watch the automated production of a motorcycle license plate holder for the KTM 1290 Super Duke R in an illustrative and multimedia supported demonstration. The complex-shaped fibre composite hollow part convinces with its significantly increased performance and an absolutely impressive weight reduction of about 60 percent compared to the current mass-produced component. As part of the "Project R.A.C.E. (Reaction Application for Composite Evolution), Hennecke has now made a decisive development step with top industry partners for industrializing the so-called CAVUS-technology from KTM Technologies, which allows producing fibre composite hollow parts using an automated high-pressure RTM process. This method of process can be implemented in many other integral manufactured fibre composite hollow parts like roof constructions, structural components or even monocoque geometries. CAVUS denotes the process chain from the core production, manufacture of pre-forms with carbon fibres in braiding technology through the HP-RTM process to the release of the core material.

Starting point of the production is the specially developed core. It consists of sand and water soluble additives. To produce the pre-form, carbon fibres are woven around the sand core using a fully automated process. With the braiding process complex geometries can be carried out with a high material throughput. Due to the large placement accuracy, the resulting pre-form already shows the final shape of the finished component.

The HP-RTM process starts with the automated insertion of prefabricated pre-forms by a robot into the HP-RTM mould. Subsequently, the press closes the mould and the injection process starts. The metering machine plays an important role. The Hennecke STREAMLINE realizes precise injection of the raw material system in seconds. The entire curing process takes just 125 seconds.

The robot then removes the component from the mould. The license plate holder can be further processed after rinsing the sand core with water. By using this process the economic production of composite lightweight components has moved within reach.

The presentation of the extensive mixhead portfolio was another major attraction. This year the PUR specialists granted visitors impressive, interactive insights into the inner workings of high-pressure mixheads by using an augmented reality application. The complex insights made it clear to the interested spectators that a great deal of know-how and many years of experience in the manufacture of high-pressure mixheads pays for each customer.

In addition to exhibits from the area of CLEARMELT surface technology the revolutionary wheel-tire combination of the all-terrain vehicle (ATV) on display was very well received by the visitors. Michelin North America Inc. now also produces the tweel, an airless wheel rim and tire combined to a common component, for ATVs. The wheel, which is manufactured using Hennecke ELASTOLINE metering machines, is now celebrating success in more and more new areas of application.

Hennecke could also score with visitors in its after-sales. Hennecke's 360° Service presented its comprehensive support services based on a state-ofthe- art digital infrastructure.

The Hennecke trade fair stand was well visited throughout the entire duration of the event, and the large number of innovative themes met with considerable interest. All innovations were enthusiastically presented to the professional audience by Hennecke's trade fair team. In summary the Polyurethane specialists from Sankt Augustin talk about a great success at the world's most important trade fair. 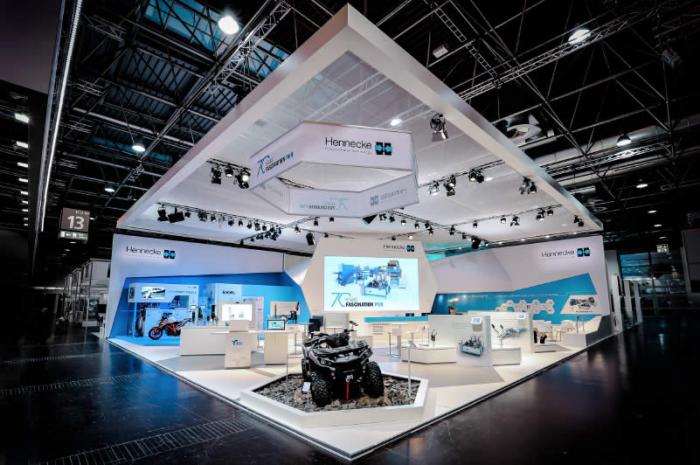