Blue Intelligence: Under this name, Hennecke has brought together the measures required for energy saving and reducing CO2 emissions for foaming machines. The focus is on the optimised management of machine readiness and state-of-theart injector technology with a high level of efficiency. In combination, these result in a clear reduction of energy costs. At many companies, the production processes and infrastructure have been "trimmed" to ensure energy efficiency. The avoidance and reduction of greenhouse gas emissions are not only crucial for global climate protection, but also for companies themselves. Fewer emissions through reduced energy consumption also means lower costs.

In their search for potential energy savings in their production processes, many companies overlook the machines and plants used in polyurethane technology, since these are often not applied in continuous operation in mass production. Among polyurethane processors the focus is typically on a high level of machine up-time, high quality of the parts produced and low consumption of the raw material components.

During production the PU parts are manufactured in groups which are often irregular, with intermittent production interruptions. During these semiautomated applications, interruptions occur due to the removal of parts, cleaning and the spraying of a release agent or during a mould change. However, if one considers this mode of operation for PU machines in detail, one finds great potential for saving energy based on the typical mode of action and operation of these machines.

The reaction components used have to be held ready by the machine during the waiting times in an optimum condition in terms of temperature, pressure and homogeneity. For the direct triggering of a pouring process, it is also necessary for the main units, such as the metering pumps and mixhead hydraulic unit, to continue to be operated in a low-pressure circuit. In this condition, machines with an average output still need a significant 30 per cent of their nominal energy requirement.

In the control version of the HighLine machine type, which was presented for the first time at the K Trade Fair in November 2013 at the Hennecke stand, the foaming machine can now be switched to standby mode. In this version, the main units are completely switched off after a maximum interruption time has been reached, without significantly extending the required lead time until the next pouring process. On the one hand, this is achieved by means of a modified temperature control concept, which also works even if there is no component circuit via the metering pumps and heat exchangers. On the other hand, equipping the machine with constant pressure injectors enables the shortest possible pressure build-up times. With the renewed call for a pouring process it is therefore possible to switch the machine directly to high-pressure circuit mode, not only with respect to the components, but also hydraulically. The time that elapses until the possible triggering of the pouring process only differs insignificantly from a start from the low-pressure circuit with the units already running.

The interruption time until the machine is shifted down to standby mode can be freely adjusted and ideally adapted by the machine operator. Depending on the application and installation size of the foaming machines, significant reductions in energy consumption can be achieved. The absolute height can be determined on the basis of a load spectrum for each specific application.

Besides the standby time, Hennecke has also analysed the pouring process thoroughly with regard to its energy savings potential. The result is a clear increase in the efficiency level of the injector. In the case of the high-pressure foaming machines which are mainly used on the market, the energy for mixing the reaction components is generated by means of the atomisation rate, i.e. through a correspondingly high pressure in the mixhead injectors. Here, the efficient transformation of high pressure into mixing energy plays a significant role in determining the amount of energy required. The speeds in the injectors of a mixhead required for sufficient mixing are between 70 and 150 m/s. In order to achieve these speeds for the chemicals, which to some extent are highly viscous, pressures from 80 to 130 bar are needed at the injectors.

Computationally, only one third of the practically applied pressure would be required for the friction-free physical conversion of the pressure into speed due to the increase in the pulse current. This clearly shows the great potential available for making improvements in the field of injector technology. By means of more consistent shaping of the injector geometry to achieve optimum flow, it has been possible to significantly improve the efficiency of the conversion process. For this, modern flow simulation tools have been used. The illustration shows the distribution of the speed in an injector, in which the internal fluid friction is reduced and a greater share of the energy can thus be converted into kinetic energy. Improved efficiency of the foaming machine by changing the level of effectiveness of the injectors is only possible when the machine is running with a high-pressure circuit during the pouring process, thereby showing its effect in particular during series production or in the case of continuous applications.

Conclusion: In addition to the use of state-of-the-art injector technology with high levels of efficiency and an adapted temperature control concept, expedient management of machine readiness achieves a significant reduction in energy consumption. Both measures have been implemented in the new HighLine machine range. The effect of the energy savings is also particularly significant for applications in which small and mediumsized quantities are produced in an irregular sequence. 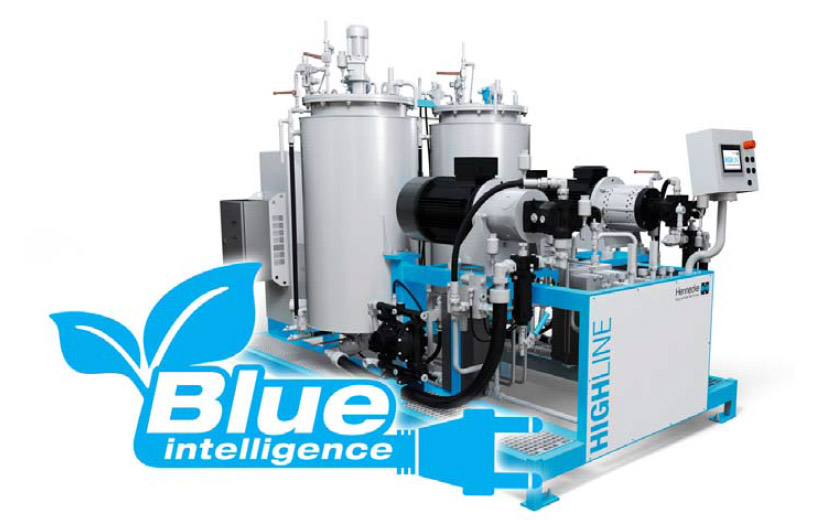 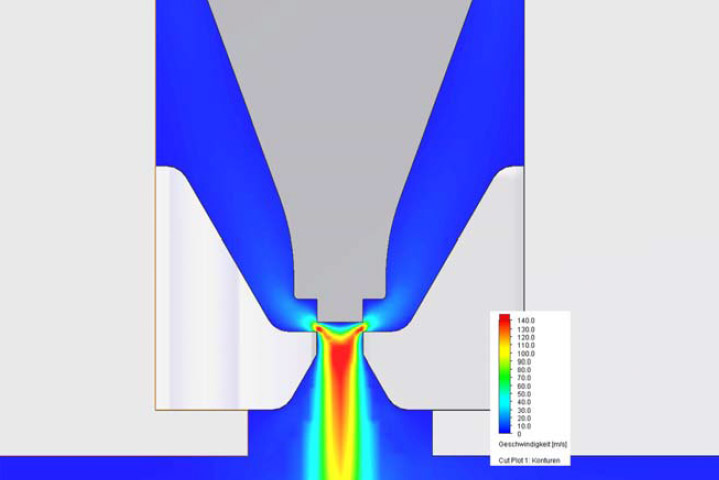