The face in a crowd

Since 1983, Hennecke has been supplying high-class polyurethane processing technology for the Chinese market where it established its own subsidiary in 2006. During its trade fair appearance in Shenzhen, the company that was founded by Karl Hennecke in 1945 and received more than 500 patents will focus attention on its wide range of polyurethane machinery and equipment.

Hennecke is not only recognized as top supplier of PU processing technology, but also as manufacturer with the widest range of equipment. The great variety of sample parts on display at Hennecke's booth will provide visitors with a convincing overview of the whole spectrum.

moulded foam and refrigeration appliances are manufactured and sold. The company's revolutionary ideas and products Page 2 of 2 have attracted attention over and over again, just to mention the highpressure mixing of PU components, the flat-top system for efficient block foaming, the NovaFlex® process for producing flexible foam blocks using natural CO2 as a blowing agent, Pentane Process Technology for making CFC-free foams for refrigeration appliances, ClearRIM technology for finishing high-grade surfaces as well as PUR-CSM spray technology for manufacturing lightweight and high load-bearing PU parts with glass or natural fibre reinforcement.

When it comes to foam moulding lines for the automotive industry with an ever-increasing demand for model variety, Hennecke also keeps offering new solutions. The latest example is the ECD (Easy Connect Disconnect) system. It is an improvement of the QCD (Quick Connect Disconnect) system and stands out by its optimized design. The system has been specially developed for the infeed and outfeed of mould carriers during running production. The mould carriers are automatically decoupled and moved to a manual handling station (i.e. mould change or maintenance). Simultaneously, a new mould carrier is pre-heated and brought into the line without any loss of cycle time.

The trade fair management of PU CHINA 2012 anticipates more than 8,000 exhibitors this year. Hennecke will not be one among many, but rather a familiar face in the crowd. 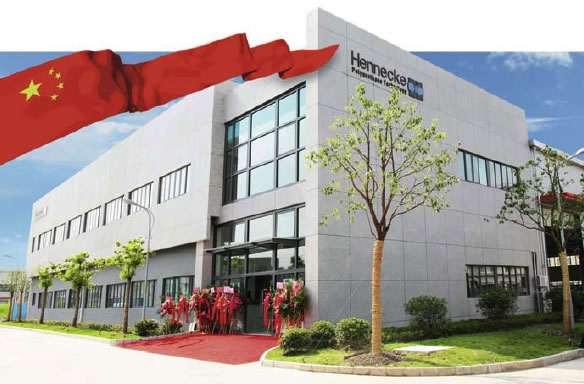