ROTAMAT polyurethane foaming lines are the consistent implementation of the industry's demands on a largely automated, discontinuous production of door elements with an insulating layer made of rigid polyurethane foam. Hennecke’s new ROTAMAT EM complements the series with a modular version that is driven exclusively by electric motors.

In ROTAMAT systems, the mould carriers rotate around the horizontal axis in a cyclical turning motion. In the operating station, the mould carrier is opened via a rocker after it has been unlocked. The operator removes the foamed door and inserts the new sheet metal door and inliner. Before starting the foaming operation, the lower part of the mould carrier is swung back into the horizontal position. After the fully automatic foam filling has been completed, the ROTAMAT indexes to the next position and closes the mould carrier during the turning movement. With a successful track record of over 20 years in the worldwide production of door elements for refrigeration appliances and in the manufacture of insulated polyurethane panels for varied applications, the ROTAMAT principle has become a fixture in the market.

With the new „EM“ type, Hennecke adds a version to the ROTAMAT series that is driven exclusively by low-noise and virtually maintenance-free electric motors, thus providing efficient production at an excellent priceperformance ratio. Among other things, a new construction for the first time enables a direct drive of the drum. With the high acceleration of the electric drives, the ROTAMAT EM is also suitable for foaming systems with a comparatively short reaction time.

ROTAMAT EM systems are available for seven or eight mould carriers with external diameters of up to 2,500 mm in length, 900 mm in depth and 240 mm in height. The integrated mixhead manipulator can optionally be fitted with up to 3 axes in a biaxial variant and/or with two mixheads. The processing of pentane-blown systems is also possible with the EM type. The construction for this includes integrated ventilation openings already mounted at the factory, which only need to be connected to an external exhaust air system via a flange at the top of the main frame. As an option, a ventilation system can be supplied by Hennecke.

Users of the ROTAMAT EM naturally also benefit from the design advantages of the system. The systems technology is not only extremely space-saving but thanks to the comparatively large opening angle of the mould carrier, it can also score points from an ergonomic perspective. Moreover, the new plant version demonstrates its high efficiency even before it is put into operation. The delivery of the plant consists of several preassembled units which not only significantly facilitate and reduce the assembly effort on site, but also make shipping very easy because the preassembled units perfectly fit into standardized sea containers. 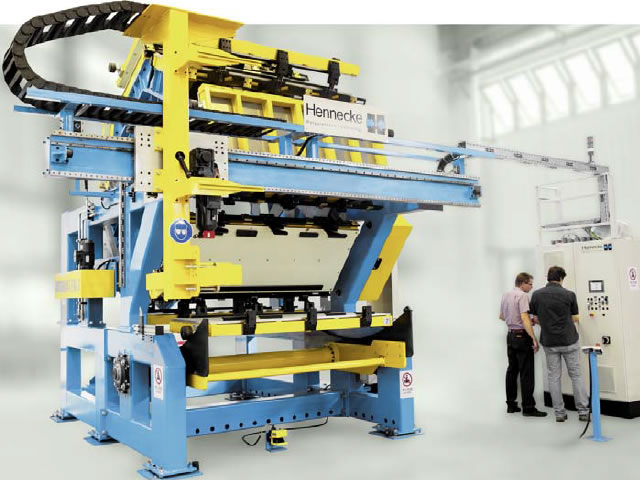