Hennecke not only had a trade fair stand at the largest furniture production event in the world, but also, as a special highlight, allowed the specialist audience to experience the live operation of the slabstock plant at the in-house TECHCENTER located in Sankt Augustin. Many accepted this offer and were impressed by the high quality of the compact plant.

PUR specialists are the market leader in the field of slabstock plants. Hennecke specially developed the continuous JFLEX slabstock plant for a medium production volume. The JFLEX is very compact, significantly more affordable than conventional slabstock plants and impresses with the usual Hennecke quality. The plant has proven itself on the market for over three years and has become very well known. During this time, Hennecke has constantly continued to optimize the plant, so that manufacturers can produce even more efficiently and economically.

On two trade fair days, Wednesday May 17th and Thursday May 18th, about 80 trade fair attendees accepted Hennecke's offer and traveled comfortably by shuttle bus from the Cologne trade fair to the Hennecke TECHCENTER in Sankt Augustin. Along with a number of technical detail issues, many of the international visitors from twelve nations also brought specific projects with them to the event and took advantage of the opportunity to learn extensively about the slabstock plant.

Upon first glance at the JFLEX in the Hennecke TECHCENTER, most appeared surprised at how small and compact it was. Compared to conventional slabstock plants, which are about 40 meters long, the JFLEX, at just twelve meters long, takes up significantly less space in a production plant. With its high-pressure metering, liquid laydown system and rectangular block device, the JFLEX is optimally equipped to fulfill the requirements of foam, mattress and furniture manufacturers.

The technical details are compelling as well: The isocyanate is injected into the mixer with pneumatic nozzles. This saves up to three percent in raw material. In addition, the process ensures that the operator has a large range of control over the size of the cell. The focus of attention was also on Hennecke's patented technology – the so-called J-pipe – with which the liquid mixture is injected and which allows the plant to be constructed so compactly.

In the live production of an approximately eight-meter foam block, it was also astonishing how few staff members were required for production. The visitors thoroughly inspected the freshly produced and cut foam blocks and were impressed by the block shape, which stood out with its ideal rectangular form. Because to be able to optimally utilize foam blocks with very little waste, it is very important for the block to be as perfectly rectangular as possible.

The thin skins and fineness of the foam cells of the blocks also made a positive impression. Some visitors took a closer look and were surprised to find no pinholes in the foam. Another advantage of the compact plant: When starting up the plant, the operator can take a sample at seven meters rather than 20 meters like with conventional plants. If the formula has to be readjusted, the quantity of sub-optimal foam is then much lower. In the presentation, the Hennecke technicians also demonstrated the short transitions for a formula change. Finally, Hennecke demonstrated how simple the machine is to clean and maintain.

Most guests agreed on one thing on the ride back to the trade fair: The visit was worth it. The JFLEX produces high foam quality very efficiently. Similarly priced plants don't even come close. 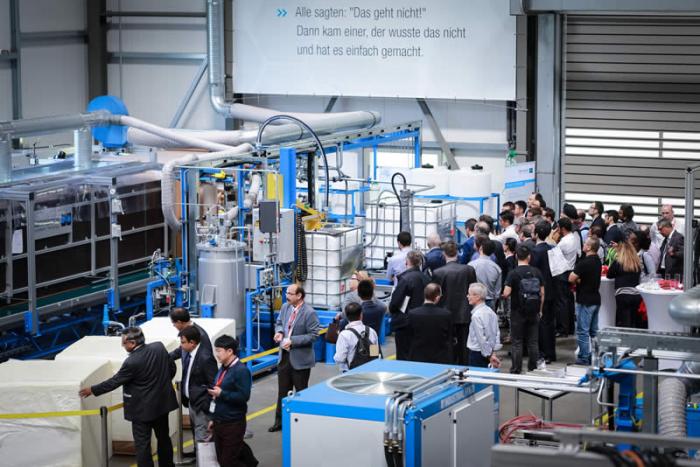