Ergonomic workstations as well as networked and energyefficient systems - the new production line for refrigerators and freezers at the BSH site in Giengen meets all the requirements of a modern and eco-friendly production. Part of the production line consists of the new highly automated KTT foaming plant from Hennecke for the production of refrigerator and freezer doors with an insulating polyurethane core. The novelty here is an innovative car park concept for the mould carriers, which enables a mixed production with various curing times but a largely consistent cycle.

BSH Hausgeräte GmbH has invested several million euros in the renewal of the production line, which came on stream in January 2015. An integral part of the production line is the new KTT foaming plant from Hennecke, jointly developed with BSH. The requirements of BSH for this project were clearly defined: a significantly higher degree of automation in the mixed production of various types of doors and a better ergonomic construction than in conventional manufacturing systems.

A refrigerator or freezer door is always built on the same principle. There is an inner side made of plastic and an outer side made of sheet metal. Polyurethane is poured in between these two elements, which cures as a foam and forms a firm connection with the door elements. In addition to the insulating effect of the foam, the door simultaneously obtains its stability.

In conventional door manufacturing, for example with the tried and tested ROTAMAT systems from Hennecke, the foam in the door cures in a drum system. Here, the mould carrier rotates in a clocked rotating movement around a horizontal axis. With this type of manufacture, the operator always has the same workflow at a single station. Removing the finished door from the open mould, inserting the plastic inner side as well as the sheet metal outer side into the mould, and as the final step, automatic filling with polyurethane takes place. This operator workflow determines the cycle time of the entire plant.

With the new Hennecke KTT foaming plant, the removal, loading and foaming steps are now divided into three downstream stations. This division considerably reduces the cycle time. In order to increase the flexibility of the system, the doors no longer cure in a drum system, but in a type of "multi-storey car park".

In the first station, a six-axis robot removes the finished door from the open mould with a vacuum gripper. The flat vacuum gripper is designed so that it can transport all model variants of the refrigerator doors - one or two-door in various sizes. At the second station, the operator inserts the inner and outer sides. BSH and Hennecke have paid particular attention to the ergonomic design of this workstation. When placing the door elements into the open mould of a conventional plant, the operator inserts one part into the lower mould half and the other part at the top into the open mould lid. For the insertion into the lid, the operator must really stretch. To avoid this, Hennecke has simplified the insertion. The operator places the inner and outer parts only into the lower mould half. When transferring the mould carrier to the third station for filling, the mould closes and opens again immediately. In doing so, the sheet metal outer part is taken into the upper mould half.

Two mixheads on a linear system pour the polyurethane into the mould. With a small door only one mixhead is at work, with large or two-piece doors both mixheads are used so that the mould can close again quickly. For each door type, a special foaming programme and the necessary curing time is stored in the control system.

Then the plant moves the mould carrier via a central lift into a free park position within the four-storey structure. The lift then fetches a mould carrier with a finished, cured door and moves it from the removal station back into the production process. Up to ten mould carriers can run in the system simultaneously.

This "car park system" gives BSH the opportunity to run a mixed production of different types of doors. No matter how long a door needs to cure, the cycle of the plant remains largely the same. An infeed and outfeed station for the mould carriers enables the moulds to be changed during production without causing an interruption. Therefore each mould carrier is designed self-sufficiently. It is equipped with a motor to open the mould, a compressed air reservoir for the air cushion to execute a parallel stroke during opening and closing, and an electric temperature control to provide the desired temperature during curing.

The BSH site in Giengen focuses consistently on the topic of industry 4.0. The entire production line is interconnected. This enables, not lastly, perfect coordination with the cooling device assembly line, where the refrigerator and freezer doors must be made available in a timed manner. The devices manufactured by the company are not just for the German and European markets; they are also sent from Giengen to the entire world. 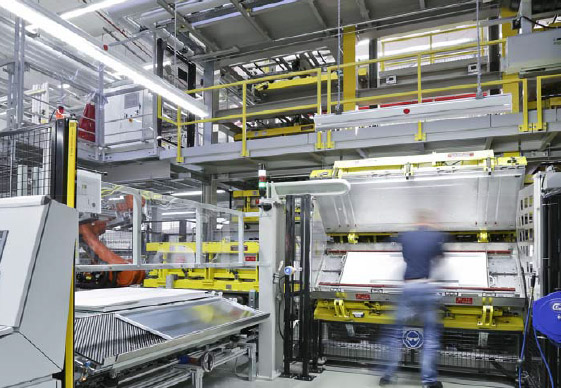