The supply company INDUPOL has been mass producing steps for trucks since October 2014. However plain the polyurethane part may look, it does pose a real challenge for the developers at Hennecke due to its complex geometry.

INDUPOL a supplier for truck and bus manufacturers from Arendonk in Belgium looked for a suitable partner for systems for manufacturing steps from rigid polyurethane foam with a painted surface for truck driver cabs. After asking the polyurethane specialist Hennecke, they soon had the first sample parts. The challenge with this project was the extreme mould geometry of the 3D cavity, which made filling the mould with polyurethane considerably more difficult. Together with BASF, a supplier for the easily foaming PU material, and BOMIX, who contributed with the relevant paint and release agents, Hennecke specialists found a suitable solution in several series of tests carried out in their technical center whereby the reactive mixture fills the cavity reliably when being poured into the closed mould. Immediately after curing, a layer of paint is applied in the In-Mould-Coating process.

After extensive testing of the sample parts, the truck manufacturer gave the go-ahead to INDUPOL for mass production. Hennecke supplied the required production line, a high-pressure TOPLINE HK metering machine with IBC container station and a mould carrier press from Hennecke partner AutoRIM Ltd, as a complete solution. INDUPOL's mould is designed as a dual cavity so that the driver's and passenger's side can be manufactured in one cycle period. Due to the complex geometry and a design with a grained surface, the mould is equipped with hydraulic extractor rods for demoulding components more easily.

A highly efficient MT 18-2 deflection mixhead ensures optimal mixing quality and raw material efficiency. The high-pressure polyurethane metering machine HK 470/470 supplies the reaction mixture. The Hennecke machine is designed for a maximum output of 940 cm³ of mixture per second. The mould is opened and closed by a mould carrier of the MG series from the Hennecke partner AutoRIM Ltd. from Derbyshire in England. The press is for moulds of up to two tonnes in weight. State-of-the-art security systems with safety laser scanners and light curtains provide the best possible protection for workers. When opening, the upper and lower mould plates pivot towards the operator, thus facilitating the removal of components. The cycle time is approximately five minutes. The period is divided into a shot time of four seconds and a curing time of 120 seconds for the PU mixture. The subsequent application of paint takes a total of approximately two minutes until curing. 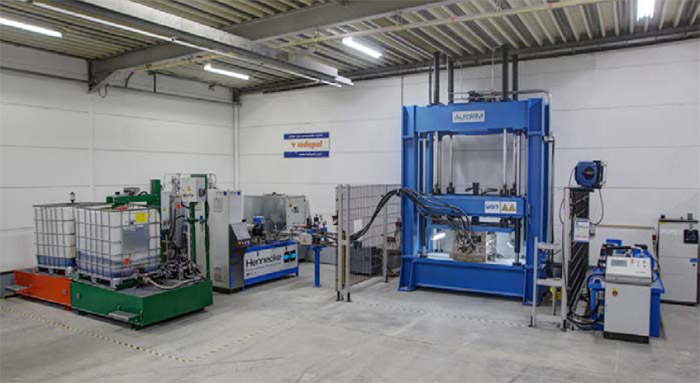